The global pandemic has brought the world to a standstill. With continued quarantines and lockdowns, it has driven the world to its knees. People lost their jobs at an alarming rate.

According to the Labor Force Survey, between October 2019 and April 2020, employment decreased at an average of 20% across all industries with food and beverage, construction, ICT (Information, Communication and Technology), transportation and tourism as the most affected, losing around 26% to 38% of jobs per industry. The economy in turn plunged to -7% growth with recovery to pre-pandemic growth rates projected to take a few years, according to the IMF (International Monetary Fund). Life as we know it, has been turned upside down, and the term “new normal” is now ingrained in our vocabulary.

In the midst of all of this, people who were lucky enough to be employed despite the circumstances did not have a choice but to go to work even though they could get infected while on the bus, on the train, or just by waiting on the street. This fear of risking exposure has been present also among consumers, causing low sales and bankruptcies.

A group of architects decided to probe public transport and spaces. They asked themselves, “How can we make travelling to work less dangerous so that the economy can move while people are kept safe?“

After noticing the way that the government and people scrambled to take control of the outbreak caused by coronavirus infections, TAHI was formed. The lockdowns were indeed necessary, but because people were suffering from unemployment, there had to be a better way.

Echo Architectural Design Studio came up with TAHI — a proposal that stitches the different parts of the city, improving the quality of life while building a resilience to external factors such as pandemics.

Urban areas in the Philippines are very lively due to the hustle-and-bustle of everyday life. But as the decades went by, we’ve gotten so used to our traffic-ridden, congested and difficult cities. This pandemic magnifies just how broken and outdated our cities are. The lack of train and bus routes, proper sidewalks and alternative routes to different areas encourage congestion, pushing the rate of infection upwards in urban areas. This shows how much a malfunctioning city can break the economy and millions of Filipinos due to a single virus.

Echo Architectural Design Studio propose an approach called urban acupuncture which aims to identify spaces that could work better and then improve those spaces to make a whole urban area more efficient.

According to Echo Architectural Design Studio’s Managing Architect Sharleen Jae Salazar, the firm saw that major CBD’s – where most of the population go to work – have only one or two major entryways. “We decided to concentrate on making more access points and making them safer to make the commute to work better,” she said.

A Quick and Simple Start

The proposal has a 9-year timeline separated into three phases. With TAHI, the firm proposes a quick and simple start. The first phase happens in the first three years where small-scale solutions like proper sectioning of bike lanes and open spaces or sidewalk pavements designed to promote social distancing and community involvement are built. This gives people at least a 5km to 10km radius around the central business districts more options for their work commute that focus on self-mobility rather than dependence on congested public transport. 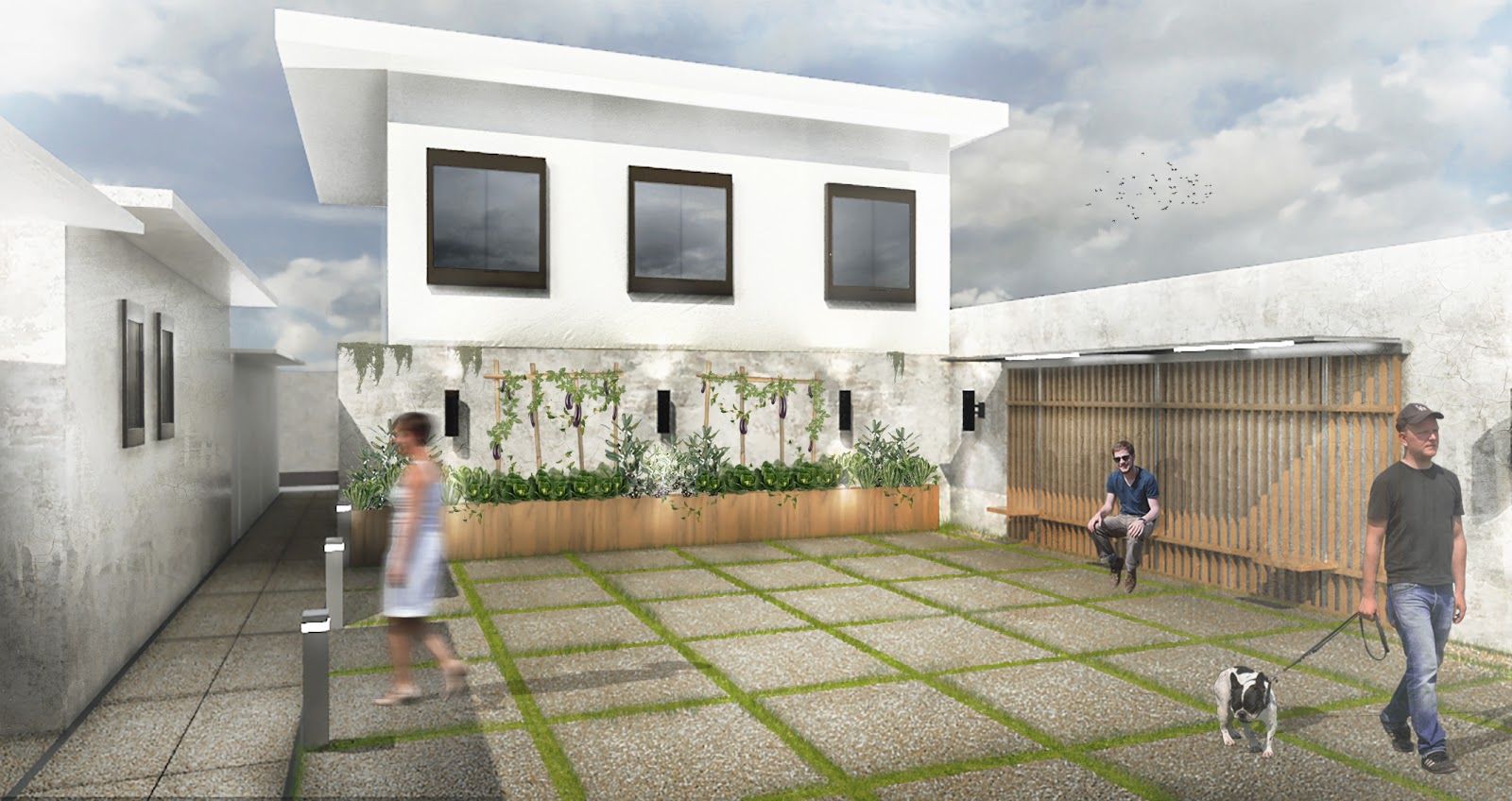 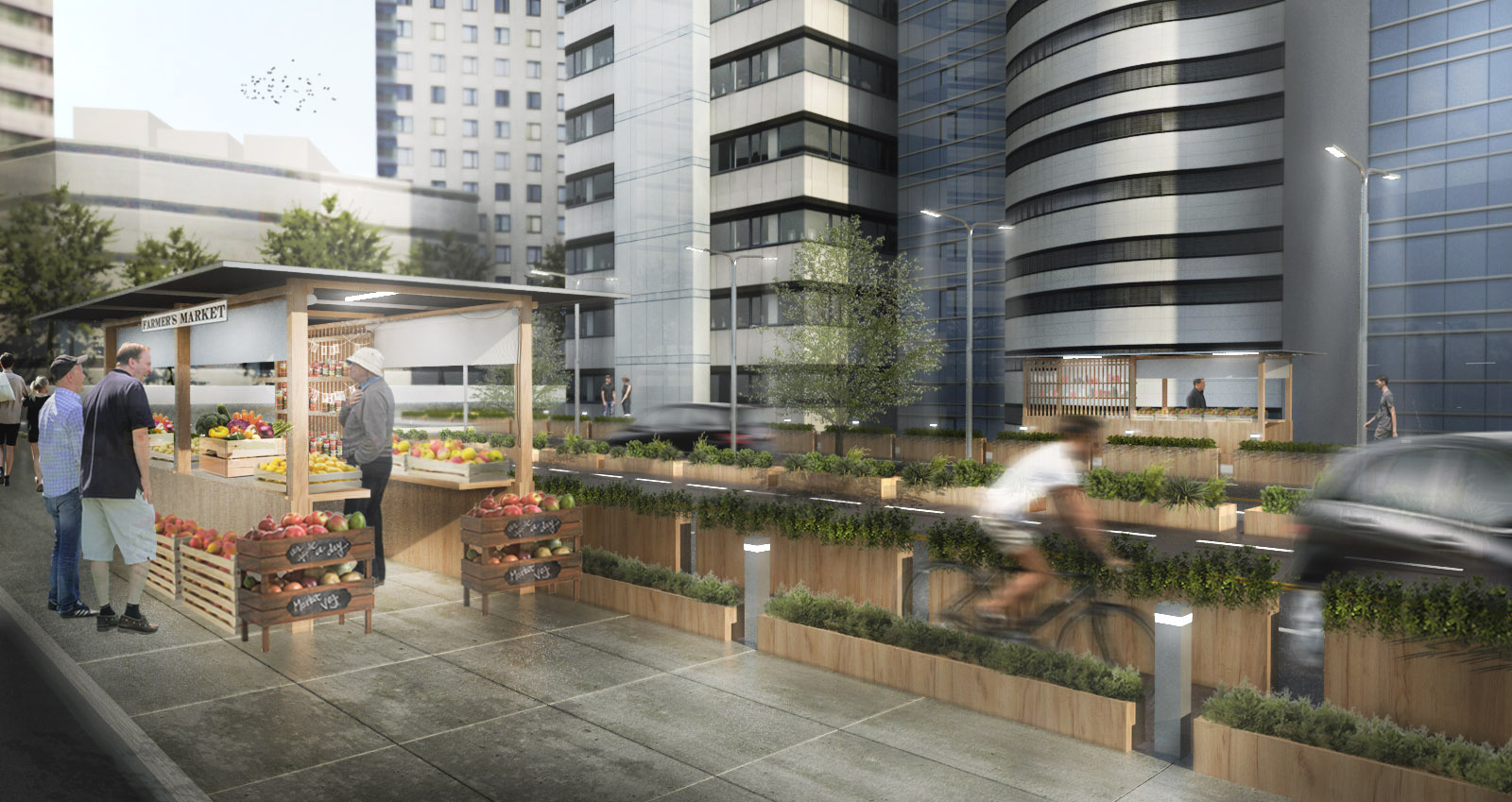 In the second phase, taking place in the fourth to sixth years, the projects are scaled up to include a larger radius around the CBD’s to provide more people with better work commute options.

“We propose making large intersections safer for cyclists and pedestrians. Transport stops for jeeps, buses and tricycles are also improved for social distancing and to encourage assigned stops where routes and timelines are posted, making public transport faster. In conjunction with these transport projects, we propose an expanded talipapa with socially distanced stalls on sidewalks where farmers and other essential goods merchants can sell their products in safe, socially distanced spaces,” 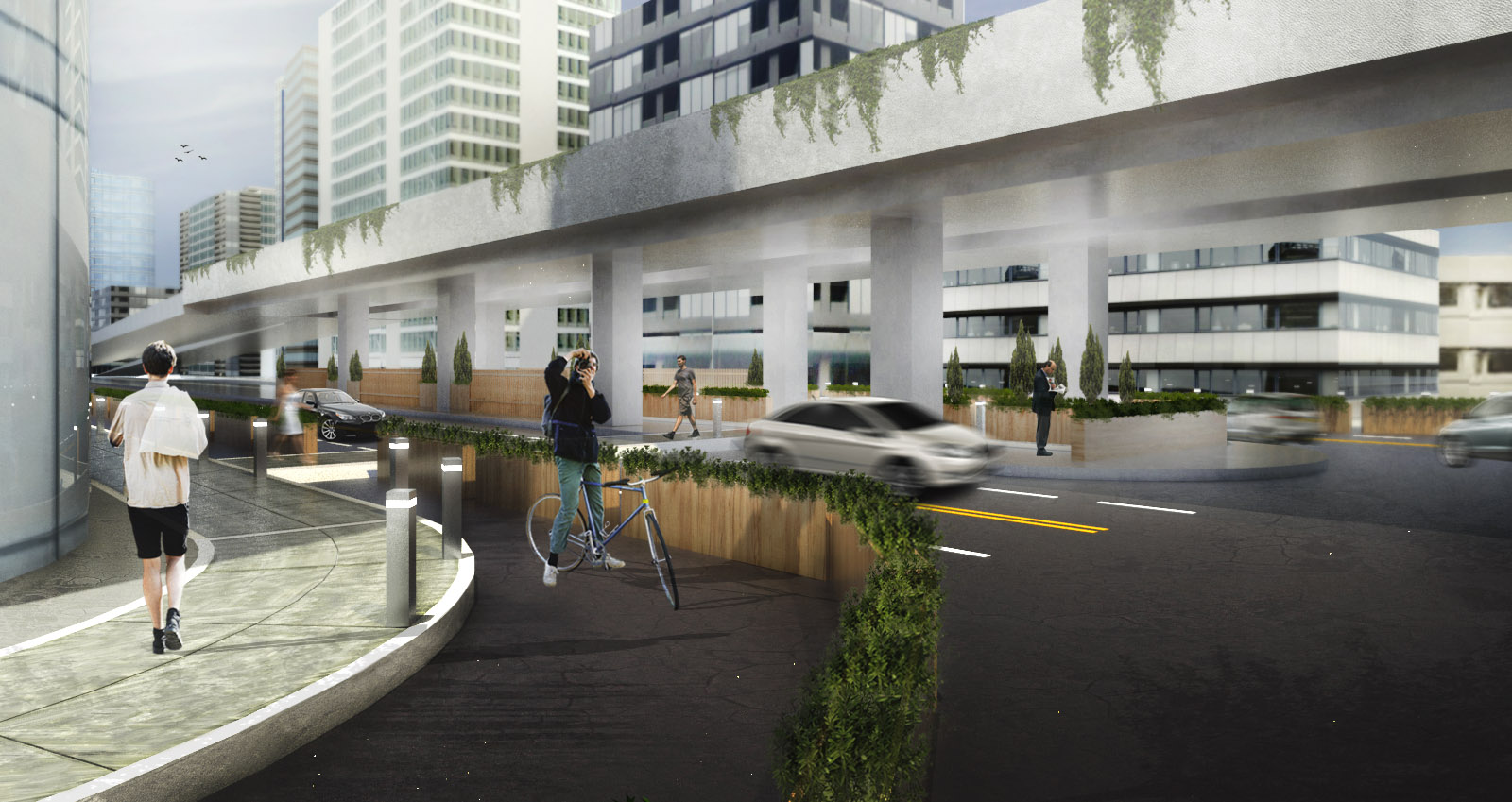 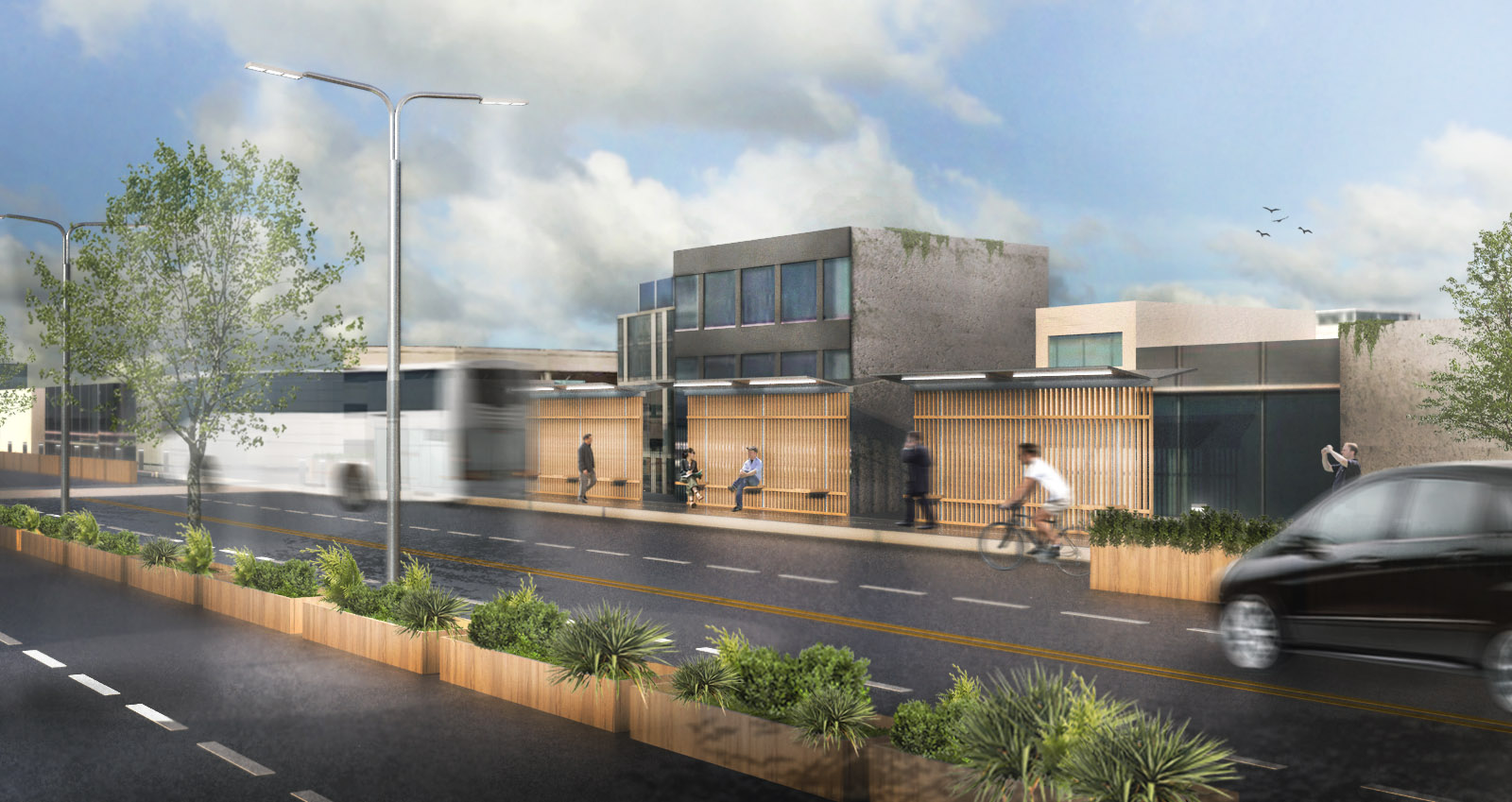 Lastly, the firm has a single proposal for the final phase, however, it is the hardest to implement.

They propose a clean building flow where the country’s building code will require mandatory sanitation spaces before entry to main building areas and floors, especially for high occupancy structures like office buildings and condominiums so that even buildings are made to be resilient to infectious viruses.

Left: Inside of a building with mandatory sanitation spaces (marked in yellow)

Salazar recounts the possible roadblocks for the project. According to her, a major limitation would be the need to foster cooperation among different city governments– coordination would be quite challenging.

Another limitation is that the projects can change if some improvements to the proposal can be made after observing how each phase goes. However, that can also be seen as an advantage.

Lastly, this project would need a lot of investment from the public and even the private sector to accomplish all three phases.

TAHI, however, is also structured to address these issues. To tackle the large investment issue, they made the first phase inexpensive and easy to do so that it’s easy to start.

According to Salazar, minimal major infrastructure is needed and materials required to build these projects are affordable . “It gives the community time to try out these new ways of traveling without having to spend a large amount of public funds,” she added.

For implementation and coordination, each phase consists of three years – the length of a mayoral term. This way, each set of projects can be started by an LGU and most projects will pull through assuming the mayor will win a re-election. This ensures the continuity of the project while still making each phase possible as a single group of projects. Scaling up these projects, especially between the first and second phase, is also possible. Depending on the success of the project and acceptance of the community — after an experimental first phase which only reaches a small number of people — the second phase will be able to connect a bigger population to more viable ways of commuting to work.

Some may ask “But after nine years, the pandemic would be over, right?” To be fair, that is true. However, COVID-19 is not the only virus that has the capacity to ravage this ever-globalizing world.

According to the IBPES’ (Intergovernmental Platform on Biodiversity and Ecosystem Service) workshop on biodiversity and pandemics, land-use change or when people spread into previously uninhabited areas, deforestation and urbanization caused more than 30% of disease events since the 1960’s. This means that our urban areas must build and maintain resiliency because pandemics like this are likely to keep happening. We must protect ourselves so that the economy and more importantly, millions of working Filipinos will not have to suffer from something as severe as the effects of the COVID-19 pandemic again.

“For Echo Architectural Design Studio, the goal is to establish a culture where each Filipino knows that an efficient urban city is a necessity we ought to be given to be functional and healthy as a country. These projects can shape the way Filipinos interact with the urban environment and how they care for their city and the safety of others. Through this, we promote awareness of the space and people around them. This proposal ultimately works to re-establish the trust in going outside and working, dampening the fear felt by Filipinos so that once again, the Filipino can go out to work and enjoy the vibrant Philippine urban landscapes in a new sense of normal.”

Albeit countries are currently facing this unprecedented global crisis, we are given a fresh opportunity to stretch our creativity and exercise resilience with a vision of a tomorrow that is better than today.  By stitching together innovative interventions, we can reveal a unified urban fabric to help our economy. The pandemic may have brought us down to our knees; we will stand once again and move forward.